Sherry Sheffield has been a Licensed Marriage and Family Therapist for almost a decade. But she’d never seen anything like what happened in the horse arena at Discovery Ranch.

Ashley (not her real name) struggled with Reactive Attachment Disorder. The 16-year-old was literally looking for love and acceptance in all the wrong places, all the wrong ways. In a desperate attempt to stop their daughter’s destructive behaviors, Ashley’s adoptive parents placed her at Discovery Ranch.

“Ashley loves horses” Sherry recalls, “but her mother is terrified of them. We were doing an activity in the arena with about six free-running horses. Her mother was increasingly anxious and frightened. She finally said she would just step back near the fence and observe.” 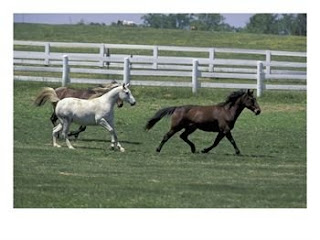 For the students, the object appears to be to move the horses, without using a rope and without force, through a designated obstacle course. No verbal communication is allowed.

Raul Willard, equine specialist and therapist says, “It’s not the completion of the task that’s important. It’s the process that’s involved. In that process they start connecting the dots to themselves.”

And that is where the change began for Ashley. The child who had never been able to give or accept affection from her parents saw the fear in her mother’s eyes as the woman hovered near the fence, away from the pounding hooves.

That’s when Ashley did the unexpected. “She worked her way to her mother and put her arm around her,” Sherry remembers. “She just stood by her side, helping her feel safe.” Then Ashley took her mother’s hand and slowly the pair inched closer, one step at a time, to the animals.

“Ashley stayed by her mother’s side, holding her hand and helping her, throughout the entire activity,” Sherry says. “There was so much emotion, so much love in that touch. It was a bonding, healing moment.”

“Even though her adoptive parents had been very loving and supportive, because of Ashley’s abuse and neglect as a young child she was unable to physically or emotionally bond.”

“Ashley feels at home with horses because it’s not nearly as scary to connect with animals,” Sherry explains. “She felt safe enough to reach out and show that she cared.” Sherry used powerful memories of those feelings in Ashley’s individual and family therapy sessions. As parents and child talked about the experience they began to remove barriers to trust.

“Experiential therapy like the equine activities is what we do,” Sherry explains. “And because we do so much more of it here we create more opportunities for these kinds of experiences to occur.”

“These types of moments are so rewarding,” she says. “To see families come together like that, healing broken relationships. I love being a part of that.”