It wasn’t a big deal, really. When the few friends he had rode off on their bikes, Brandon stayed behind. When his younger siblings learned to ride and felt the exhilaration of youthful speed and freedom, Brandon only imagined. No big deal. He didn’t care. He had explosive outbursts of anger about many issues. Why should this be any different? 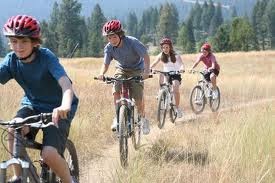 Bright and gifted with an amazing ability to memorize, 13-year-old Brandon struggled with poor physical coordination and social skills – two hallmark characteristics of children with Non-verbal Learning Disorder – or NLD. His outbursts at home were becoming more frequent and more violent.

Matt Child, LCSW at Discovery Ranch, says, “Brandon’s parents were wonderfully supportive. They love Brandon dearly.” So much so that they sent him to a wilderness program for help.

The rigorous physical work of backpacking, bow and drill fire building, and cordage, did wonders for Brandon’s self-confidence. His parents were encouraged with his progress. But they realized Brandon still needed help. They sent him to Discovery Ranch, a residential treatment center in Mapleton, Utah.

At the ranch, Brandon continued working through his difficulties with Child’s help. One of the most profound aspects of his therapy took place not in a building, but on a bike.


During one of the family counseling sessions Brandon’s father mentioned is son had never learned to ride.

“We decided that might be a tangible place to start,” Matt says. “We asked Brandon, ‘Do you want to learn to ride?’ Encouraged by his physical successes in the wilderness program, Brandon said he did.”

Staff member Leslie Giles borrowed a bike from her son. The three of them found a spot near the barns.

“When we first went outside there was a group of kids out there. I thought maybe Brandon might be embarrassed and want to find a different spot,” Matt recalls. “He asked, ‘Why move? We can do it right here. I can’t ride a bike but I’m not embarrassed about it anymore. I’ll do whatever I need to to learn how.’”

Matt and Leslie pushed and cheered and helped dust Brandon off when he fell. Finally, they were able to let go of the bike and Brandon took off on his own. As the days passed Brandon’s confidence and skill grew. If there was an errand to run on the ranch he volunteered, always riding the bike. Then the three of them devised a plan.

Parents Conference was coming in a few weeks. Brandon’s parents were coming to visit. Why not surprise them with his newfound skill?

“The hardest part was keeping it a secret,” Matt admits. Finally the day arrived. While Matt took Brandon’s parents to a pre-arranged spot, Leslie grabbed a video camera and hid near some trees. Brandon went to get the bike.

As his parents rounded the corner Brandon came riding out to greet them on the bicycle.

“His parents were astonished,” Matt says. “They all hugged and wept.”

Perhaps a bike really is no big deal. But Matt says the bike is a symbol of what happens at Discovery Ranch. In his therapy sessions with Brandon he uses the experience with the bike to help Brandon understand other challenges he faces. That’s how experiential therapy works.

“Brandon still has lots of miles to go,” he says. “But he’s learned you can step up to the challenge. You can conquer.”