“Bullet in my shoulder…blood…runnin’ down my vest. Twenty in the posse…and they’re never gonna let me rest! Till I became a wanted man I never even owned a gun. But now they hunt me like a mountain cat…and I’m always…Always…Always on the run! A wanted man…”

With eyes constricted and focused, he ran to the cliff. It was the only way out. A narrow passage almost straight up. A six-shooter in his right hand and the holster strapped to his thigh, he new he might be meeting his maker soon. With one more step to freedom, it happened…the unmistakable sound of a pearl handled revolver. Blam…Blam…Blam. He arched his back, arms flailing to the side. The acrid smell of gunpowder hung heavy in the air, darkness closed in around him and he fell…tumbling head over heels until he slid to a stop at the base. With life still flickering, he sensed the hot breath of his nemesis. He felt the sharp blow of a kick in the side and the high-pitched voice yelled out…”Ok…good one, now it’s my turn.” 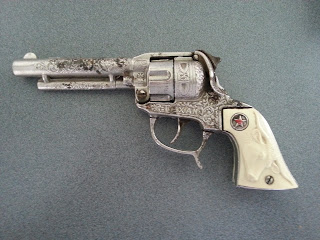 For two boys aged 10 and 6, playing “stunt man” on the stairs was a game filled with danger and excitement. The Frankie Laine album playing in the background on dads Hi Fi Stereo added a sense of drama and reality. The goal of “stunt man” was to see who could fall down the stairs the most convincingly after being shot with a pearl handled cap gun. No half-hearted falls or hops or slides. This was the real thing. When tumbling head over heels to the bottom, total relaxation was the key.

The record now made the scratchy static sound as the needle rhythmically moved back and forth in the center of the album. We were done with “Stunt Man” for now, but tomorrow would bring a new day…maybe riding cookie sheets down the stairs. Yeah, that’s it…cookie sheets.

Stephen C. Schultz said…
Sho Nique, I sure hope you liked this post. It was a little difficult to appropriately interpret your comment! Seriously, you are too kind! Made me smile!
April 30, 2014 at 9:44 AM

Stephen C. Schultz said…
Thanks so much Cheryl. I have fond memories of my childhood. Kinda fun to write about!
January 19, 2015 at 12:45 PM

Suzy said…
Love it! Thanks for sharing! I was just talking to my sister about the great games we made up when we were kids. Kids these days don't know what they're missing out on.
June 26, 2015 at 4:32 PM

Stephen C. Schultz said…
Thanks so much Suzy. I'm glad you liked it. I agree, I'm not sure kids today develop the skills of creativity and imagination like generations past.
June 26, 2015 at 4:40 PM