I received a call from a friend the other day. She was sharing with me some changes that were taking place in her life concerning career and a move. She mentioned she was excited about new opportunities for work and that she would be moving closer to her extended family in Southern California where she was raised.


She said, “I haven’t told my kids yet! They will go crazy…they love hanging out with their cousins!”


In the course of our conversation, she made a comment about my blog. She said she loved the personal stories and some of the “lessons” learned.


I jokingly said, “Well, things have been so busy lately, I haven’t been observant of my surroundings”.


This is the back story that brings me to this moment, writing of family time, observations and lessons learned. I’m going to share a scenario that thousands of families across the country will probably relate to in one way or another. 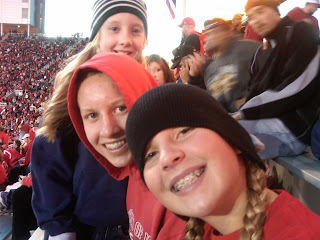 For the last three years, we have been season college football ticket holders to my Alma Mater. Prior to the first year, my wife and I sat down and discussed the financial aspect of having season tickets and weighed the benefits and the sacrifices that would be made. We felt that family time doing something we all enjoyed was important…we bought six tickets.
Our team is playing in a new conference and there is a lot of anticipation and anxiousness each time they play. The fact that it was a Thursday night game, played under the lights, simply added to our families fan fervor. There has been an excitement and energy within our family for the last few months since the envelope of tickets came in the mail.

We loaded the kids in the car and made sure everyone had their one un-opened water bottle that is allowed in the stadium. Complete with jackets, a box of wheat thins for the trip and tickets in hand we hit the road. Other cars on the freeway emerged with university stickers, flags and team spirit license plates. We all worked our way to the stadium that sits up on the hill like bee’s to the hive. Traffic was bumper to bumper as we slowly crawled into the parking lot. Stress levels rose and mixed with game day anticipation as we looked for a spot to park. Everyone grabbed their jacket. I checked to make sure we had the tickets one last time and made sure I had car keys in my pocket. I closed the trunk, locked the doors and took two steps away from the car and my wife says,

I unlocked the doors and searched the floor in the car. I bent down and looked under the car. The back seat was checked as well…no phone. My wife did the quick frantic mental run through of everywhere she had been and the last time she used it. Then my 17 yr old son and I both called her number at the same time…competition style, to see who would actually get through. He won; I got the phone’s greeting message. My wife said as she was leaning in the car,


Emma, our 10 year old daughter was standing right behind my wife. She broke into a sly smile and held out her left hand with her palm up and said,


The phone was in Emma’s hand. Immediately Emma was bombarded with comments like;

Emma’s face turned from one of teasing and fun to sadness. Her nose crinkled up and she started to cry. In fact she cried and pouted on the way to the stadium. She walked a pace or two behind the rest of us and it was obvious that her feelings were hurt. I slowed my pace a bit until I was walking side by side with her. Then I put my arm around her shoulder and she pulled away.

Oh…that game! I wish I could say there was some profound fatherly technique I employed in this situation. You know, break out the old family therapy handbook and help her process her feelings. But, there wasn’t. I simply put my arm around her again, and again she pulled away. So, I did it again and she pulled away…moving a little further down the sidewalk. So I jogged over and put my arm around her again…this time, she had a smile. And when she tried to pull away, I held on a little tighter. We were both chuckling now and she actually moved a little closer to me with a bit more skip in her step.

In my career, we work with families through a therapeutic process to overcome some very clinically complicated situations between parents and their troubled teenagers. But sometimes, situations can be over analyzed. Sometimes, parents simply need to be parents doing parent things. There doesn’t always need to be an “analytical reconciliation of a childhood behavioral scenario in a public venue.” Sometimes simply being an observant, caring, tenaciously goofy parent is all that is needed.