The following is a journal of my recent trip to the USA where I visited Wilderness Programmes and other Boarding School / Residential Treatment Centres in Southern Utah. 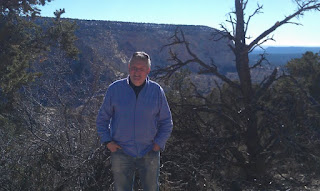 Saturday 10th November – depart London Heathrow at lunchtime and arrive in LA late afternoon the same day.....transfer to Las Vegas arriving early evening for an overnight stay at the Luxor on The Strip.


Sunday 11th November – waken to a lovely warm Nevada sunny day, not knowing that my host (Steve Schultz from RedCliff) had battled through a snow storm the previous afternoon and stayed nearby overnight so as to collect me and then to drive me back north up the I15! We travelled in bright sunshine up to St George where we had an early meal (avoiding the coach loads of New Zealand pensioners at the Marriott) and an early night to catch up on some much needed sleep.


Monday 12th November – following a hearty breakfast we drove out west from St George for the 1 hour journey to RedCliff’s base at Enterprise. After meeting some old friends and also introducing myself to the new Clinical Director and some of his team we swapped vehicles for a 4 wheel drive to head out into the desert. About an hour later we started to look for a couple of groups who had English kids amongst their contingent.....I was particularly keen to meet a boy and a girl who had been sent out to Utah following my conversation with their Parents. Before long we stumbled on an all girl group and I was able to spend some time with a brave young lady who is finding life hard but who has now started to open up and be frank with her therapist – I wish her well. Later in the day I had a long chat with a boy from the UK who was on “solo” at the time, he is still very angry but has done well in his phase work and he is hoping to graduate soon. We shall see?


On the way out of the field we met by chance a mature group of students who were predominantly out there battling with alcohol and drug related issues...they were very open and honest about their personal history and the challenges they face. A very humbling experience!

Tuesday 13th November - after a very early start Steve and I were to be guests of WinGate Wilderness Therapy at Kanab, Utah we were to tour their facility and get a better understanding of their ethos and their unique approach to helping troubled teens. I had met Sheri Gallagher some time ago in London but it was the first time I had met Shayne....her husband and the programme Executive Director. After travelling with Shayne through some breathtaking scenery (they call it little Hollywood) we spent time with a couple of groups camped out in the bush and my lasting memory is how open and honest the young people were with the group (and also with themselves) as they look to address their issues. We wished them well and returned to base via a private viewing of some native Indian rock carvings ( Petroglyphs ) in a canyon owned by a local farmer....fascinating!
NOTE: Grateful thanks to the folks at WinGate for helping with some of the cost of my trip....much appreciated!


Wednesday 14th November - Steve and I visited Oxbow Academy a RedCliff programme where Steve is an “owner” and he has a particular interest in the operation of what are now two separate campus environments. I was familiar with the original (west) campus which deals with boys who have deep seated sexual issues and yet I was keen to determine some of the links these boys had with earlier electronic gaming addictions....I was not to be disappointed. As always the boys were very open frank and sometimes graphic in their description of past event that led to them being placed in this facility.


The new (east) campus takes boys with very different yet equally complex needs and it was fun trying to explain to them who I was and why I was there....without constant interruption. Clearly there is a need for this new facility and the boys were making good progress with lots of support from some amazing people who provide a structure a therapeutic mechanism and professional assistance.


Wednesday evening I had dinner with my old mate Dr Mark Burdick (who flew in from California to see me) along with John Karren and his wife from Elements Wilderness Programme in Utah. We had a brief but enjoyable discussion and meal before all had to depart.....lots of work in progress!


Thursday 15th November – a welcome return visit to Discovery Ranch where I was able to renew old acquaintances and tour the new education block before talking intimately to some girls and boys about their past exploits and their current experiences. I enjoyed a guided tour of the overall campus facility where one of the students took the lead and proved to be very informative. Some great work being done here with help from dedicated professionals. I had (another) enjoyable lunch but declined the open invitation to get on horseback again....due to my recent recovery from a broken ankle (my excuse!).


Thursday PM was spent undertaking a little retail therapy (shopping) in the local Provo mall and then the evening was spent in a Chinese restaurant with Steve his lovely (long suffering) wife Pam and two of their great kids.


Friday 16th November - nearly time to end the trip so it was a brief visit and tour round Discovery Academy and the new Discovery Connections facility (great to see Brent Hall and my old friend Matt Hendry again!). Interesting conversation with the new headmaster Lanny Adamson about the challenges of trying to keep UK kids up to speed with the British education curriculum whilst enrolled in the various programmes.....more work in progress!


Following lunch with Steve’s eldest son on the campus at the University of Utah I had time for a brief tour to see the “lasting legacy” of the Winter Olympics.....courtesy of Mr Romney. Good job!


My lasting memories of speaking to a great bunch of kids (across various programmes) as they battle with their issues are as follows:


1)    Whilst initially the finger is always pointed at the young person as being the cause of the “problem” it does not take long for the penny to drop and for Parents to realise that it is nearly always a FAMILY PROBLEM!


2)    I asked a number of kids what they would do if they could “turn the clock back” and with the vast majority they simply wish that their Parents had talked to them more and had warned them of the dangers of making the wrong decisions!


3)    My major concern at present is the developing trend for teenage boys to start out with electronic gaming interests.....that turn to addictions.....that lead to on-line activity....that leads to viewing adult websites.....that leads to acting out.....that can lead to crimes of a sexual nature!


Many thanks to Steve Schultz and all my friends and colleagues in Utah for a great trip....keep up the good work that you folks do...day in and day out.