Truth or Consequences - A story of teenage heroin addiction


Tears welled up in my eyes as I moved my head back and forth in a Stevie Wonder like motion. The wind was whipping the smoke from the fire directly at me and no matter where I moved it seemed to follow. The age old saying, “Smoke follows beauty…and beauty was a horse” didn’t seem to be quite so humorous when I was the one in the smoke!


The sun was setting and the wind seemed to subside a bit. I stared at the fire in a trance like state, watching as the flames snapped and nipped at invisible structures in the air. Sparks surfed skyward on heated currents, then disappeared in the blink of an eye. Shadows danced amongst the pines and junipers that surrounded the camp. There is something peaceful about a campfire; the warmth, the light, a sense of safety, the comfort of survival. 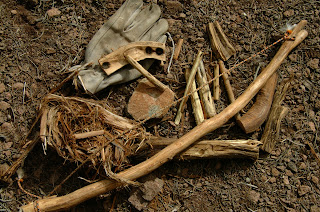 My mind drifted to earlier that same evening. Troy (Name has been changed), a 17 yr old from Michigan, was in charge of building the fire that evening for the group. He proceeded to pull out his fire-set which consisted of a bow shaped tree limb with a cord from end to end, a fire board, spindle and nesting. This is a laborious and frustrating process to essentially start a fire with sticks. Troy stood up the bow, with one end on the ground and the other in his arm pit, and applied some light pressure. The cord went slack and he twisted the spindle into the cord, and then held it steady. He lowered the end of the spindle into the notch on the fire board, and then put another notched piece of wood on the top of the spindle. He then applied some downward pressure and began to move the bow horizontally back and forth about three inches off the ground. He got into a rhythm and soon there was some smoke. His focus was intense, his coordination was well practiced. Quicker and quicker the bow moved back and forth. The smoke was constant and then he yelled, “Coal”! Troy then lowered the bow and gently tipped the fire board so the coal, a small glowing ember of wood dust, rolled into the nest. He began to blow on the nest, oxygenating the ember, eventually busting the coal into a flame. He then put the nest in the fire pit and started to stoke it with twigs and small limbs. The fire grew.


Troy busted out in a big grin! “That’s my 15th fire this week!” he exclaimed. 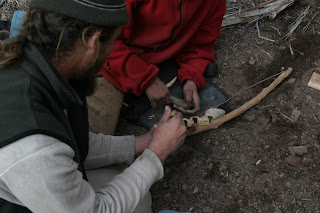 What an accomplishment!  There was a look in his eyes that exuded a sense of accomplishment and competence. There was no sign of self doubt, inadequacy or problems associated with being a drug addict. There was no yelling, swearing or throwing things in a fit of rage. No, Troy started the fire without any modern convenience, in a confident, mature and determined way. This would be a great accomplishment for anyone, let alone a young man with a history of drug abuse. But there is something even more amazing about Troy…he only has one arm. Troy’s right arm did not fully develop in the womb and he was born with no arm two inches below his elbow.


I was spending the night out in the “field”, which consisted of over 650 square miles, with a group of troubled teens from across the country. Each of these young men was between the ages of 14 and 17 and each one of them was battling their own personal demons. Their parents had enrolled them in RedCliff Ascent, a Wilderness Treatment Program designed to work with treatment resistant youth.


Since my return home, I have been thinking a lot about Troy. He was articulate, bright and well educated for his age. He had obviously developed some resilience around the fact that he had no arm below his elbow, yet he still felt compelled to get involved in drugs and other risky behavior.


How many of us struggle with this same dynamic in our lives? Do we excel in certain areas of life, yet have that “demon” we constantly battle in secret? I heard a statement when I was just a teen myself that went something like this; “Only if you are unafraid of truth can you find it.”


Once Troy graduates from RedCliff Ascent, will he stay “Clean and Sober”? I don’t know.


Is the probability good that he will? The research demonstrates that there is a good chance he will…if he gains the strength to be unafraid of the truth and deal with the consequences of those nasty demons.

Note from editor: If you would like more information on this unique therapeutic intervention, please leave a comment with contact info and I will send you a booklet complete with photos and research results.

Levelsoflife said…
I love the post! You are pointing out really important issues in an individual that co pelles themselves to use anysubstance. I have witnessed many talented,intellectual,and sometimes successful very Loving and caring people who seem to be do the same. Is it because there's more to it? Is there more to this story? I believe there is...I also believe that our society blames most teens issues on drugs and alcohol instead of having REAL EMPATHY and finding deeper feelings.
You are a great support for what you are doing! It's awesome to see. We need more people like that. Can you post on here places in Tacoma that have that same compassion?

Stephen C. Schultz said…
Levelsoflife...Thank you for your comment and kind words. Whenever an individual or even a family is dealing with addiction of any kind, there is always more to the story. The addiction behavior, as you so rightly point out, is merely a symptom of deeper emotional concerns of some kind. Thank you again!
September 7, 2015 at 9:41 PM