May 28, 2011
I recently read an article in the Chicago Tribune about a family's experience with a census worker. It reminded me of the experience I had last year. While we did mail in our census sheet that came in the mail, there was some bureaucratic mix up and they sent a worker to our house. 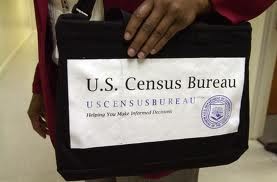 I need to say up front that I understand the need for a National Census. There are political as well as financial consequences attached to the census that seriously impact communities and citizens of this great country. I also think that some of the questions on the census are "politically" motivated and unnecessary. My "trust" in the "Federal Law" sited on the census sheet that protects our privacy is a bit suspect when the Federal Government appears to pick and choose which Federal Laws it decides to enforce.

This story is really more about "Character" and "Competence" of those dispatched to collect the data as well as those who provide their training.

I had my family out doing yard work and a lady came up and identified herself as a census worker. She was probably in her mid fifties and seemed nice enough.

I said, "We mailed ours in a while ago."

She proceeded to give me some excuse about stacks of census sheets and bar codes and if it doesn't get recorded in time they send the workers out to get the info...on and on. I told her that we mailed it in and I can't be responsible for their inability to to process them quick enough. I mentioned we were busy and I would rather not talk to her right now. She would not leave. She started talking about the constitution. She asked if I knew what the census was for. She said that all my neighbors had done it and that it would not take very long. I reiterated that I had already done it and sent it in.

She then responded by saying, "You should not mind giving me the information now then, should you?"

I was getting irritated with this process. I'm an addictions counselor by training and she was using extremely manipulative tactics and being bothersome so I would just give in and give her the information so she would leave.

She then brought out another census sheet that she had started with my 16 year old sons name on it. She said she came by a few days ago and talked to my son while he was mowing the lawn. He, not even knowing about the census, told her he was not comfortable answering questions to a stranger, and rightly so! I mentioned that I had concerns about her talking to my children and that it disturbed me she would do that. She then mentioned to me that she has the "right" to check with my neighbors to get the information if needed.

I was calm and cordial, but not helpful. I told her time and again, "I sent mine in." Then she said, "So, you are OK if I mark on the sheet here, refused?" I said, "No, I haven't refused, I sent it in the mail!'

I understand she was doing her "job". She was far from courteous, professional or considerate of my time and my families time. She was manipulative, sneaky and confrontational.

I am interested to know of others perceptions or opinions. Is there an excuse for this type of behavior from a government representative in the United States of America?