The mist drifted effortlessly above the glass-like water. Drips from the oars broke the silence as they rhythmically melted into the lake sending endless miniature waves out in every direction. Dawn was upon me, my favorite time of day. Overhead, I heard a faint whistling sound that grew ever louder. I looked up and saw ten to fifteen mallards, wings set, gliding, tipping, and adjusting in unison, as they lit simultaneously on the water about Twenty-five yards from my boat near the lily pads. What a beautiful sight.

Mornings like this were common on Collard Lake in 1973. At the age of ten, there was nowhere on earth I would rather be, than in the old aluminum rowboat with my father, stalking that elusive lunker. That trophy large mouth bass that I knew was just waiting in the limbs of the next fallen Doug fir, Cedar, or at the edge of the lily pads just around the corner. 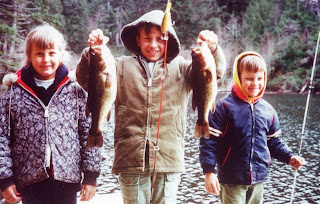 I was not new to this ritual, for it was the same every morning we were at “The Cabin”. Some might consider it boring, but to me it was a game of cat and mouse. We knew they were in there; it was a matter of skill, patience, knowledge and timing.

We were quite the team, my father and I. Even at the youthful age of ten, I was skilled in the art of rowing. Yes, it was an art. Silently rowing the boat parallel to shore, twenty to twenty-five feet out. Knowing how to read the cover and terrain along the shore so I could anticipate my father’s next cast. He stood at the front of the boat, casting the gold and black Rapala countdown with precision and skill. That lure would wiggle between limbs of sunken trees, pause as he slowly scraped it across the top of an underwater tree trunk, and then quickly reeled it to the edge of the boat.

We serpentined along the waters edge for hours, communicating only through eye contact, a nod of the head and the occasional whisper. I knew instinctively where he would cast next and he trusted me to position him just right.

We were wrapping up our time on the water this day. There had been little action. Oh, we caught a few six to eight inchers and the occasional aggressive perch, but no keepers. We had worked our way to the West side of the “second” lake and Dad made a cast towards the lily pads. Half way between the lilies and the boat, the pole suddenly bent towards the water. Reflexively, my father set the hook. The pole stayed bent. It was a snag on the bottom. Bass don’t strike like trout do. Often it’s difficult to determine weather you’ve snagged it or had a strike. 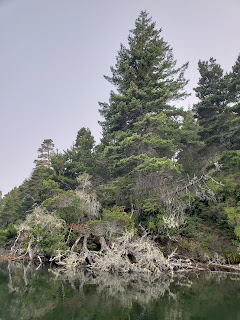 I instinctively rowed closer to the snag, knowing my father would reel his pole tip into the water to un-snag the lure. Then it happened. The line moved through the water. It not only moved, but it moved away from the boat as we approached. My father and I glanced at each other in amazement as he continued to pull up on the line and reel in as he lowered the pole. As I tried to keep the boat steady, I realized we were actually being pulled through the water. This must be one big fish! He looked into the water to see what he could see. Then my father shouted, “No way! You’ve got to be kidding me!”

I pushed on the right oar, swinging the boat sideways, and leaned over the edge to take a closer look. I followed the line into the water and there it was. A large brown object…a large brown furry object to be exact. That brown and gold Rapala had found its way into the fur of a beaver. Dad immediately allowed some of the line out. The last thing we wanted to do was spook it. My father turned to me and started to ask what we should do. The beaver probably weighed between 30 and 35 lbs. Fortunately, before I could answer, the line went slack and dad was able to reel in the lure. 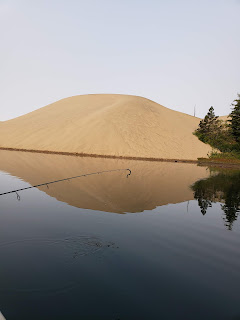 We just sat there looking at each other for what seemed like an eternity, trying to fathom what just happened. We laughed as we contemplated what we would have done should the lure not have come undone. I turned the boat and began to row towards the narrow passageway between the lakes.

There was never a shortage of adventure to be had on Collard Lake. The rest of the day would bring sliding down the sand dune, on a waxed snow saucer, and seeing how far we could skip across the water. I would drift aimlessly in an inner tube with the warm sun on my back and then later search the shallows for salamanders. 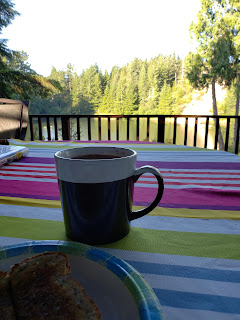 As I continued to row back to the cabin, I gazed over my fathers shoulder, I saw the beaver’s head break the surface of the water creating a small wake as it swam effortlessly along the lily pads. Then in one quick motion, the beaver rose up out of the water and dove head first, slapping its huge tail on the water as it submerged out of site. I would like to think the slap on the water was a thank you or friendly gesture of some kind, but most likely it was simply a reminder to never forget “the one that got away”.

If you enjoyed this Father/Son fishing adventure, you may also appreciate "The Rescue"!

judithwelltree said…
This was so evocative of the moment, how lovely to have these special memories of times like these! I wonder how many opportunities are missed for times together as 'family' in today's rat-race world.
April 9, 2012 at 11:44 AM

Stephen C. Schultz said…
Thanks Judith. Yes, some great memories. Side note...the picture is me in the middle, with my brother and sister on each side.
April 9, 2012 at 8:40 PM

Unknown said…
Loved your story. I could feel myself in the aluminum boat skating across the water with you.
April 15, 2014 at 6:37 AM

Stephen C. Schultz said…
Thank you for your comment Juliana. I'm glad you enjoyed the post!Yes, those are memories i will forever cherish.
April 15, 2014 at 9:36 PM