The Healing Nature of Art and Healthy Relationships

The white lines zipped passed at a strobe light pace. The song, "Don't Stop Believing" by Journey played on my car stereo. Traffic was heavy, but still moving fast at a pace between 75mph and 80mph. 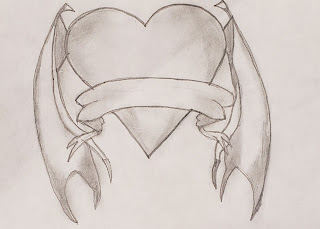 I was on my way to Discovery Academy. DA is a therapeutic/clinical boarding school for students who are preparing for the transition back home. These teens have been making steady progress throughout their very personal therapeutic journey. They have all dealt with some pretty difficult concerns. Many of the teens are working through clinically complicated family situations that include depression, anxiety, self harm, trauma, attachment, substance use or any combination of these or more. These teens have demonstrated courage, determination, sacrifice, insight and resilience as they move through the process of growth and healing.

This particular day I was on my way to a meeting being held in the conference room at DA. I was walking through the parking lot on my way towards a common area that included grass as well as a basketball court on the North edge. There was a group of girls sitting on the curb. They were there with a staff mentor and they were simply chatting and working on some assignments. I don't know if the assignments were for school or therapeutic in nature. Laughter and small talk filled the air as I approached. I moved a little closer and said;

"Hello ladies, how are you today?" And, I reached over and fist bumped a couple of girls.

They responded with smiles and said; "Fine!" 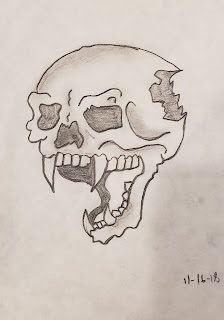 One particular young lady was shuffling some papers and organizing her notebook. She identified a paper that had a picture of a small fantasy type creature and handed it to the staff member. I looked down and saw some other pictures. They appeared to be hand drawn and were quite creative with some striking detail. I bent down on one knee and pointed to the papers while asking;

"Did you draw these? These are very cool."

She responded with a shy, sheepish smile; "Yes."

I mentioned again that these picture were very cool and asked if she was in the art class here at DA. She said she was not. I spoke to her briefly about Mr. "P", the art teacher and the passion he has working with the students.

On a whim, I asked her if she would share with me why she likes to draw and the part it plays in who she is and how it helps her in life. She smiled, looked me in the eye and simply said; 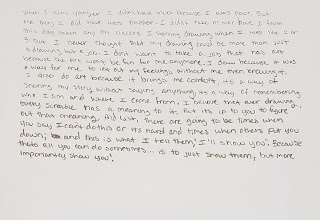 A couple of days later, I happened to be walking across the grass and saw Sophia walking towards me. I mentioned the picture one more time and she and the staff member turned to go back inside. She gathered a few pictures and we stood in the kitchen while I took pictures with my phone. She also shared with me a hand written paragraph about why she liked to draw.

She mentioned in the paragraph that she has never taken an art class. In fact, she doesn't want to. She is proud of her natural ability to teach herself. She is now recognizing that she has a talent...a talent for her to master. She also likes sharing her drawings with others. There was a kindness in her eyes and a desire to use her art as a way of connecting to her peers and helping them feel good through her artistic efforts as well.

The one thing that stood out to me was a simple phrase that she wrote. She simply stated; 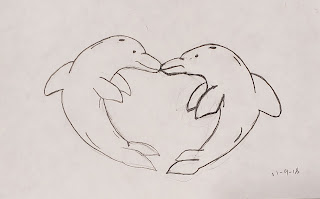