It was one of those summer days...those days when you get out of your temperature controlled car and the heat hits you like you’ve just stepped into a dry sauna. One of those days when you break into a sweat and you feel your heartbeat in your forehead. On any other day, I would have made a beeline right back to the comfort of my air-conditioned car! On this day however, I embraced the heat and started walking towards the lake. 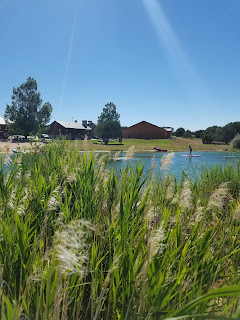 Even with a slight breeze blowing from my right to left, I could still make out the faint sounds of laughter, water splashing and the distorted syllables of distant conversations. I knew instinctively that the next two days would bring laughter and tears, frustration and joy, disappointment and dignity. You see, this trip to the lake was not about recreation or the opportunity to cool down in the summer heat. Yes, those things did happen, but I was honored to be entering the world of families who had a daughter enrolled at Discovery Ranch for Girls. This was the first day of what is known as The Family Seminar or “Family Sem” for short.

The Family Seminar is when families from across the globe come to attend a series of family workshops with their daughter. The workshops are hosted and run by the clinical and residential teams at DRG. They are broken into sections with schedules customized for the families. Some families are relatively new to the program, other families are midway through the process and then there are  families who are nearing the end with a need for managing the transition of their daughter to a different level of therapeutic involvement. 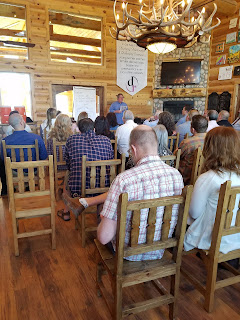 I was standing outside the fine arts building with some of the families as we waited to enter the family sculpting group. We had recently wrapped up the Art & Music group. In that particular group, I happened to sit next to a young lady with numerous scars on her forearm. That isn't really all that surprising, but seeing it always conjures up the question; why? As we waited outside, we were all having light conversation during this brief break.

The 12 year old little sister of one of the students happened to see a small lizard scurrying around the walkway. They tend to be pretty friendly little critters and are used to people being around. This young girl scooted after the lizard and was able to pick it up. She held it gently and showed her parents. Some of the other girls came around and wanted to hold it as well. There were conversations about the best way to hold it. There were suggestions to turn it over and rub it’s belly. Some mentioned that they should put it down and not traumatize it through human handling. There were lots of overlapping comments and conversations that ended up not meaning much in the end. 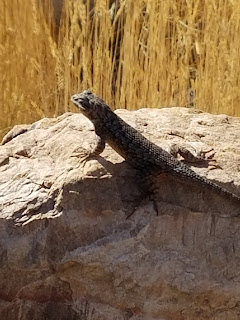 The door to the fine arts room opened and the previous group of families spilled out onto the walkway. The girl with the lizard put it on the ground. It just stood there not moving until one of the families dogs walked over and started sniffing. The lizard then started to scurry away as the dog followed right behind. Girls shrieked and laughed as the lizard, with the dog in pursuit, made its way down the sidewalk and across the road. The little lizard was happily on its way to a tuft of grass and sagebrush right at the edge of the asphalt. Being no more that six inches from the grass, all of a sudden, out of nowhere, a big black crow swooped down and picked up the lizard in it’s beak and flew off into the trees.

The girls shrieked again! Parents gasped an uncomfortable gasp. Some just stood in silence. There was awkward and strained laughter. However, all of the families simply started moving into the classroom for the next group. You may be thinking there should have been a big process group or discussion about the Circle of Life. There was none. There didn’t need to be. DRG provides an opportunity on a daily basis for these girls to experience daily living with horses, new born calves and other life situations in a rural setting. The girls find passion in their daily activities and embrace perseverance through the rigors of life at DRG. There is a consistent programmatic structure balanced nicely with a nurturing environment. In short, they develop what Angela Duckworth describes as “Grit”.

The next group, as previously mentioned, was Family Sculpting. This is where each family has a designated person who places each family member in a certain spot on the floor. They can sit, stand, have arms in the air and demonstrate certain facial expressions. Then it’s like a freeze frame and the group interprets what the “Scene” represents in that family. I had the opportunity to participate with a family who asked me to lay on the floor and represent the father who had passed away. What an honor! What a heartfelt and emotional experience for all involved. 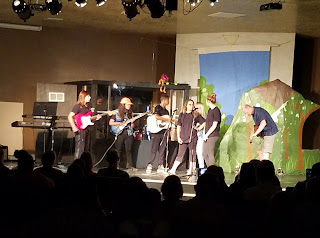 The Family Seminar wrapped up the next day with a few more workshop classes and the Variety Show. The variety show is a culmination of work the girls have done through their participation in the various “clubs” in the program. There were musical numbers, there were bands that played and a screenplay written by one of the students was performed. It wasn’t perfect...it wasn’t polished. It was real. It was heartfelt. It was emotional. There were tears. There was accomplishment. There was risk. There was dignity. There was healing!

1lzuqlegvj said…
"If you are going to play through one thing within the playoffs, you don't want|you don't need|you don't need} everybody figuring out your finger's broken,” he mentioned. “They're going to slash you. Washington goaltender Darcy Kuemper mentioned gamers are in all probability going to have to simply accept|to just accept} being "a little extra up entrance" when it come to ailments. "If I had it my means, I don't suppose folks should even know the way a lot cash we make," Chicago centre Max Domi mentioned. "It's nice just to fly under the radar. But I understand that's where the world's going." The Edmonton Oilers centre dealt 벳365 with an obvious ankle injury all through nearly all of of} final spring's NHL playoffs.
January 17, 2023 at 8:08 PM