I don’t recall his age at the time.  Somewhere in that age of finding himself.  Still in the blush of innocense.  Maybe fourteen or fifteen.  He had acquired the art of tying dry flies.  Something that takes patience and perseverance.  Actually quite good at all types of flies, he mastered the Adams.  Beautiful tail and body.  Seldom did he put on a palmer hackle but the shoulder hackle was just about perfect.  The wings consisting of the ends of the hackle were always pert and upright.


For some reason that has been lost in the annals of time Bill Spangler and I had acquired a gold mine.  I know, sounds preposterous.  Well it was.  We had to travel to John Day and then Canyon City to prove our claim.  Wasn’t much but exploring the area and clearing a little of the road.


Jared went along and we all had our fly rods in the back of the rig. Somewhere in the desert on the way back we came across a little stream that appeared that it needed to be fished.  It wasn’t large by western Oregon standards and as it wandered through the desert the willows had grown along its banks.  It was clear and rippling in places and then slowing to a gentle sweep around the bends. 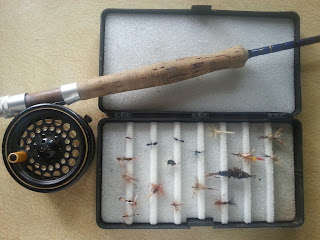 Jared had a number of his hand tied flies and picked out one of the best Adams in the fly box. In our family you only fished with your own hand tied flies or one of another family member. It was a disgrace to fish with a store bought fly.  With tennis shoes and jeans he waded out a little to the center of the stream.


He stood for a long time observing the water and its many currents and the shadowed water under the willows.  There it was.  Just a small dimple on the water.  There, again the same, only a little downstream.  Something was working the may flies under the willows.  Crouching, concentrating and careful in his movement he began the smooth graceful presentation of the Adams.  A little slurping and slight boil of water and with a gentle lift of the rod he was hooked up with a beautiful trout.


As time has dimmed the memory I cannot recall the size or the specie.  But I shall never forget the feeling of joy I felt for him at that moment.  Oh, I know that in the order of things that this was not a moment of time to be remembered.  But I will remember,  because it represented goodness and a father proud of his son.  Not pride because he had tied an Adams and caught a nice trout, but pride because I knew what he would become.  He would be a father and a man of God serving and teaching others.  He would be successful in his occupation and have a wonderful family.

That is the goodness of a loving Heavenly Father.

(Editors note: This is a story written by my Father and shared with me several years ago. It is an experience he had with my younger brother Jared. If you enjoyed this story of a father and son fishing, then you might also enjoy this post entitled The One That Got Away.)
Childhood Family Fishing Stories