The dust billowed up around my head. It was so thick it turned to mud on my teeth and the roof of my mouth felt dry and parched. My teeth chattered as I was unceremoniously bounced up and down, side to side, hanging on for dear life to the tailgate of a late model Ford Super Duty as it crawled, scraped and spun through the football sized rocks and sage brush of the high desert backcountry of the Southwest United States.

I was desperately trying to keep the $5,000 camera safe, clean and undamaged for this was not a trip of scripted lines, numerous takes and lunch buffets. This was a one shot opportunity to get interviews of Wilderness Therapy Staff working for RedCliff Ascent.

After three hours into the backcountry by jeep trail, hiking another mile into camp and peeing beside a juniper tree, my 11 year old son and I finally spotted the red fleece sweatshirts of the students and staff of the “Ravens”. The Ravens were a group of 14-17 year old students from around the globe. They had been sent to RedCliff for various clinical reasons, many of which generally included out of control adoption issues, disrespect of parents, aspergers, trauma, abuse and/or addiction concerns. There were nine in the group with four staff members. There were two students from the UK, one from Australia and the rest were from the US. 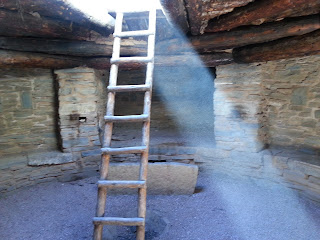 Although I was here on a work assignment, to my son this was an adventure. Riding in the bed of a truck in the backcountry, communicating by radio, drinking from a natural water source in the ground, hiking to a camp and interacting with students who had been living in the wilderness for months at a time…this was a young boy’s dream day.

Our day ended back at the main office of RedCliff Ascent. One of the staff was going to the store to pick up some drinks and snacks. He asked my son, Ryan, if he wanted to go. Ryan glanced at me and I gave him a nod. They then proceeded to get on a late model Harley Davidson parked at the end of the building. He turned back toward me and grinned. I gave him a wave and they were off in a roar down the street.

The sun was starting to set and the rhythmic pulse of the white center line was putting me in a trance. We were headed back to the hotel where we would grab some dinner and get some much needed rest. It had been a long fulfilling day. I decided to pull off the road at a historical site that featured the names of early pioneers that made their way Southwest to California. This was a particularly nice site, with a winding trail that meandered to a bluff overlooking a beautiful valley with red rock cliffs in the background.

With the gorgeous sunset to the West, we turned to head back to the car. We were simply a father and son walking quietly back down the trail, lost in thought. Ryan was first to break the silence. He said, “Dad, I’ve been thinking. I want to do what you do when I grow up!” Never has there been a more proud moment in my life. My heart swelled and I turned to Ryan and asked inquisitively, “Oh yeah Ry, what’s that?” He glanced up as we continued to walk and said with all the sincerity an eleven year old can muster, “NOTHING”!

It took a second for me to process this situation. Then I started to laugh…and laugh…and laugh. What we had done that day, in the eyes of an eleven year old, was not considered work. To him, it was an adventure…and an adventure I hope he remembers for all time.