The Rescue - A McKenzie River Adventure

(Authors note: This is an experience I had in 1978. I wrote about the experience on an old type writer complete with white out on all of my spelling errors. My mother recently sent me the original. I have transcribed it below just how I had written it as a 15 yr old teen. I hope you enjoy "The Rescue".)

The ice cold, crystal clear water gurgled sporadically as it poured over my feet. I stood directing the two-tone green river boat carefully into the current of the McKenzie River. I grabbed the bow of the boat as the current gracefully spun the boat sideways and caused it to bump the bank with a soft squeak.  Dad pulled the truck and trailer up the boat ramp and parked alongside the road.

As I turned and gazed at the river, I noticed it was a crisp morning with a light fog rising about a foot off the water. It appeared as though we were actually amidst the clouds. The sun shone through the damp, mossy limbs of the scrub oak and Douglas fir trees; and the dew on the leaves glistened in the light. The birds were darting and prancing from limb to limb and chirping as if they were little wind-up toys.

The fishing was great! We drifted down the river, the sun at noon high and the fog now lifted. A canoe, carrying a family of three, drifted near us. As the father, mother and son approached, we waved and expressed a friendly;

“Hi! How are you? Beautiful day isn't it?”
“Yes, Beautiful day! How’s the fishing?” they responded.
“Fantastic!”

And we watched as they drifted slowly towards what would become an unforgettable nightmare.

We sat helpless as the silver aluminum canoe drifted out of control into the foamy, white water rapids. The water banged against the side of the canoe as it tipped back and forth like a plastic toy boat in the tub of a child. The craft hit a log jutting from the water, dispersing all three people into the ice cold river. The canoe bobbed its way down the rapids, lodged itself horizontally in a log jam, and came to rest three feet under the water. 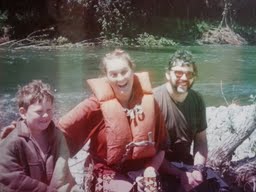 The father and son were washed ashore. However, the mother followed the path of the canoe. She grabbed the small leafless limb of a scrub oak that dangled over the water. She clung desperately for life, only a few feet in front of the log jam that entombed the canoe. The swift current would drag her under the water and the tree limb would slowly bring her back to the surface.  This action would allow her to gasp for air once more before the she was forcefully submerged by the current. This went on as if she were some type of human yo-yo. If she was to let go, it would be almost certain death. It was only a matter of minutes before hypothermia would set in and the river, once again, would collect its toll.

With tendons and muscles straining, Dad forcefully rowed the boat to shore. I gathered the fishing gear and frantically tossed it on the bank as we skimmed along the round slimy river rocks. We jumped out of the boat with a splash and dragged the boat back upstream, knowing it was only a matter of minutes before she would join the canoe some three feet under the water.

We pushed off the shore and Dad rowed towards the log jam and steadied us against one of the logs. With the water thrusting against the side of our boat and spilling in over the edge, I threw a rope across the water. The rope moved through the current with the grace of a water moccasin. In a matter of seconds it had reached the numb and panicked woman. In her panicked state, she grabbed the rope and let go of the limb. This caused her to drift closer and closer to the log jam, for the slack was not yet out of the rope. I managed to pull her across the current, fighting a mighty tug-of-war with the thundering rapids.
Now, next to the log which steadied us, I reached under her arm pits and braced my legs against the side of the boat. I pulled her over the log and about halfway into the boat. Weighing close to 200lbs, she lay helpless and unable to move under her own will. With our boat almost tipped over and the force of the rapids pushing us from behind, Dad lost hold of the log. We began drifting into the log jam. I managed to get the lady the rest of the way into the boat while Dad struggled to keep us out of the logs.

We were successful in pulling away from the log jam and reuniting the lady with her family. Others had gathered on the shore with the father and son. A fire crackled and we, a group of total strangers, stood talking as though we were all old buddies. The father, mother and son stood embracing each other.

The mother said, “You know, the biggest fear I had was not for my own life, but for the lives of my family. I didn't know where they were or if they were even alive.”

As we said our good-byes, she gave me a hug and with tears in her eyes said, “Thank You!”

That night, as I lay in bed thinking of the events of that day, I realized that people do pull together in times of need. We are all brothers and sisters, and when it comes to emergencies, rarely do we think of ourselves first.


If you enjoyed this fishing adventure, you may also appreciate this post...The One That Got Away!

Raina said…
What an amazing and life-changing experience that had to be. I grew up fishing that same river with my dad before moving southwest a bit. Thanks for sharing your story and showing that people really do pull together to help others.
January 11, 2014 at 8:36 PM

Stephen C. Schultz said…
Thank you for your comment Raina. As you are aware, there are many life lessons to be learned when growing up around the McKenzie River!
January 11, 2014 at 9:03 PM

Jennifer Smith-Kirk said…
What an experience you had Stephen, the way you described it I felt as though I was with you pulling that rope. So glad everyone was safe in the end, you should be proud of yourself. An amazing act of kindness and bravery.
February 24, 2018 at 7:59 AM

Stephen C. Schultz said…
+Jennifer Smith-Kirk Thank you for your kind words. That "Paper" is a little rough, if I recall, I actually wrote it for a creative writing English class in my High School. The picture of the family sitting on the log by the river is the actual family. My father took that picture right before we all went our separate ways.
February 24, 2018 at 2:03 PM

Jennifer Smith-Kirk said…
You definitely have a way with words Stephen, well done xoxox
February 25, 2018 at 3:31 AM